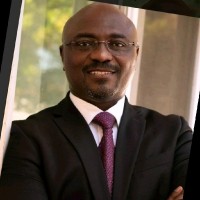 Ademola Ayo Akinkunmi, PMP, FACHE, MHA, CCM, RN, describes himself as a mosaic of many pieces that is still being built. He says that he is eternally grateful to God and to those who have contributed to making him who he is, and for the myriad opportunities he has had in his healthcare journey.

Since moving to the U.S. from Nigeria, Ayo has held many roles in health care including working in the Emergency, Medical-Surgical, and Behavioral Health departments; and serving in case management, as a nurse manager, and as the associate director of primary care centers. He is currently the director of Patient Care Services for the Medical-Surgical/Telemetry division at Jackson Memorial Hospital.

Ayo obtained his RN and BSN from Miami Dade College and earned his master’s in Health Administration at Florida Atlantic University. Though he came from a financial and banking background, his interest in healthcare was piqued when his uncle had an accident that required a long recovery. Ayo stayed with him in a Nigerian hospital for about six months before returning to college.

“That experience shaped me,” he said. “I saw that healthcare wasn’t just about medications, but about the whole person. I realized that I wanted to study something else, and when I got the opportunity to move to the U.S., I knew that I wanted to be a nurse.

“The doctors were cool, but the nurses, who were spending 12 hours a day with patients, really made an impression on me,” he added. “Becoming a nurse was a self-actualization of some sort.”

When Ayo heard about the American College of Healthcare Executives (ACHE), he realized that it was another avenue that he wanted to explore. “I’d seen people use FACHE at the end of their names, and wondered what it meant,” he said.

He credits Jackson Memorial Hospital CEO Roy Hawkins, Jr., FACHE, Rene Zipper, FACHE, Adonna Lowe, FACHE, and Adrian Parker, FACHE for encouraging him to join ACHE and to sit for the board of governors’ exam.

“Being a member of ACHE has been value-adding all around,” he said. “Besides the networking advantage, I have been amazed by the cutting-edge industry knowledge ACHE provides through regularly organized local chapter events, and the currency of the articles in the Journal of Healthcare Management.

“It’s incredible to be able to hear the thoughts of leaders in the healthcare industry,” he continued. “There’s so much information about where healthcare is going and what trends are happening; you can project this information onto your own organization to figure out if you’re on trend or not, and if you’re staying ahead of the curve.”

Ayo decided to pursue fellowship, and recently received his FACHE credential. “If something’s worth doing, it’s worth doing well,” he said. “The exam is tough; it tests different areas of knowledge in healthcare, which is pretty daunting. But even if you take it and don’t pass, you still haven’t lost because of knowledge gained.

“When you speak, you speak from a different vantage position; you can see things other people don’t see—you become more insightful and discerning,” he added of the growth that occurs. “ACHE provides you the platform that enables you to see the forest for the trees.”

Ayo appreciates all of the mentors that have gotten him to this point, as well as the support of Jackson Health System, which he considers “one huge mentorship program.” He pays his success forward by seeking out mentees and by continuing to encourage other healthcare leaders.

“I am very comfortable holding the ladder for others,” he adds.